We’re thrilled to announce our return to the David Lam Park stage for the 2014 incarnation of the Vancouver Jazz Festival. It’s been a couple years since we last played this amazing event and we’re extremely excited to be a part of it once again. We’ll be hitting the stage at 7pm on Sunday June 29th. The event is free! So come on down and enjoy a great day in the park. Visit http://www.coastaljazz.ca for more details.

An ensemble formed in 2008 by Goron Grdina, blending indie rock and jazz with Egyptian pop and Iraqi folk music elements.

Keep your ticket stubs for the door prize!! 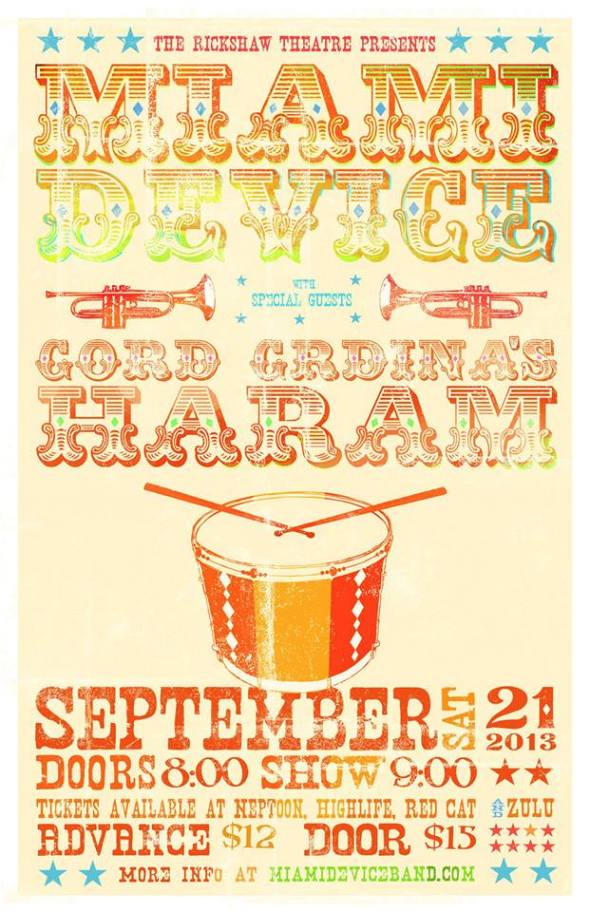 Well kiddies, we’re excited to announce that Miami Device will be sharing an evening at Vancouver’s renowned Rickshaw Theatre with Kutapira and Headspace!! In partnership with the prestigious Kalama Collective and the Rickshaw Theatre, these are three artists that never stop finding new ways to make you shake your behind.

The Rickshaw Theatre is located at 254 East Hastings.

NOTE: Tickets sold online are Will-Call only, so don’t stress when nothing arrives in the mail.

We had a blast at our album release show last Saturday. Thanks to everyone for coming out!

Until next time check us out in the latest issue of Discorder Magazine! A big thanks to Javier Badillo, Victoria Johnson, and Kim Pringle.

Sideshow Studios will play host to one of the best parties and musical extravaganzas of the year and tickets are already going fast! You can grab yours at Zulu, Highlife or Red Cat Records, plus they’re only 10 dollars!

Both new albums will be available at the show!

Copies of our new album Monopoly have arrived! We are just waiting on the vinyl and some new merch for you lovely folks before we unleash it on the world. Stay tuned for a release date!

We’ve had a great summer playing some festivals around BC including the Vancouver International Jazz Fest and Osoyoos Canada day Festival. We’ve definitely had a blast! Check out this little video of our amazing tenor player Mike Pratt while he rips a great solo in Osoyoos. Mikey is moving off to Montreal and we will all miss him greatly.

Check back often for new shows, updates, contest announcements and much more!